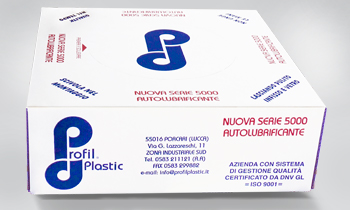 DOWN TO THE LAST METRE

One of the problems that frame makers find with gaskets (especially those for glazing) is how to keep them intact until the end of use, because in most cases the reel of gasket is not completely used up. Once open in the workshop, the gasket is prone to collecting dirt and impurities, as well as becoming twisted if it is not stored properly.

The problem that all gasket manufacturers have tried to resolve has been to preserve the product during the various stages of transportation and storage up to the fitter's workshop.

Having directed its efforts for decades towards satisfying the needs of frame makers, Profil Plastic has come up with a solution to this problem, designing and patenting a packaging method for its seals, included in the Series 5000, that manages to protect the seal not just up to the workshop but also down to the last metre of use.

This special packaging means the seal can be used without removing the reel from the box, using just the required amount while leaving the rest protected from dirt and dust, so that the seal is preserved right down to the last metre of use.